Let’s face it, most runners do not have beautiful feet.  Whether it be calluses in places you didn’t know could callous, dry skin, black or missing toenails…we put hundreds of miles on our feet and they’re generally not ready for sandal season.  They’re likely to be the reason you wear socks to bed at night.

Ask the person who does your pedicure (if you’re brave enough to uncover those puppies for a pedi).  They’ll lay it out for you – runners have the worst feet.  They let you soak in that warm water bath extra long, hoping it will help, and it never does.

But that’s no surprise, right?

Some of us wear missing toenails as badges of honor; we earned every bump and blemish and we’re proud.  Maybe we even look at it as a sign of our toughness – if we can run on feet like these, what’s it to walk a few blocks in stilettos??  Those runners tell gruesome stories of their woes when they get together after a run, relishing the way it makes others squirm.

Uh, you mean your toenail was there, flopping around in your sock after your marathon?  You felt it come off?  It jabbed you for six miles, and you kept going?

But here’s a dirty little secret some runners don’t tell you:  it doesn’t have to be that way.

You can have beautiful (or relatively less repulsive) feet.  Even after running a 50k in mud and horse excrement.

Yes, you.  You with the moleskin on the balls of your feet and the raw spot on the outside of your big toe.  It can be done.

It all comes down to shoes.  Good shoes. Shoes for the right purpose fit to your feet.

Now I know most people start running in whatever they have available, and that’s perfectly fine.  I did, and I put a good amount of miles on those Nike cross-trainers.  I simply didn’t know any better.

After a while, when my feet started getting sore, I talked with some runner friends and received the advice you’ve probably received that I’m going to pass on here.

There is nothing, and I mean NOTHING, that will end your running career faster than an ill-fitting pair of shoes.  It’s like putting snow tires on your dune buggy – it just won’t work.

Now I hear you saying how expensive “good” running shoes are and that you’re just not ready to commit that much to the sport just yet (if you’re new to running), or maybe you already love running but still don’t want to drop nearly $200 on a pair of running shoes. Or two pair, if you’re a trail runner and need trail shoes also.

You don’t have to.  You just have to be smart about it.

I have been, and while I’ve logged thousands of road and trail miles on my feet, through heat, rain, snow, ice, mud, and horse manure (yes, I’ll admit that), I’ve had exactly two blisters and zero lost toenails.  Oh, and the blisters happened when I failed to heed my own advice and wore shoes I shouldn’t have.

One blister was gnarly.  Scroll fast if you don’t want to see it. 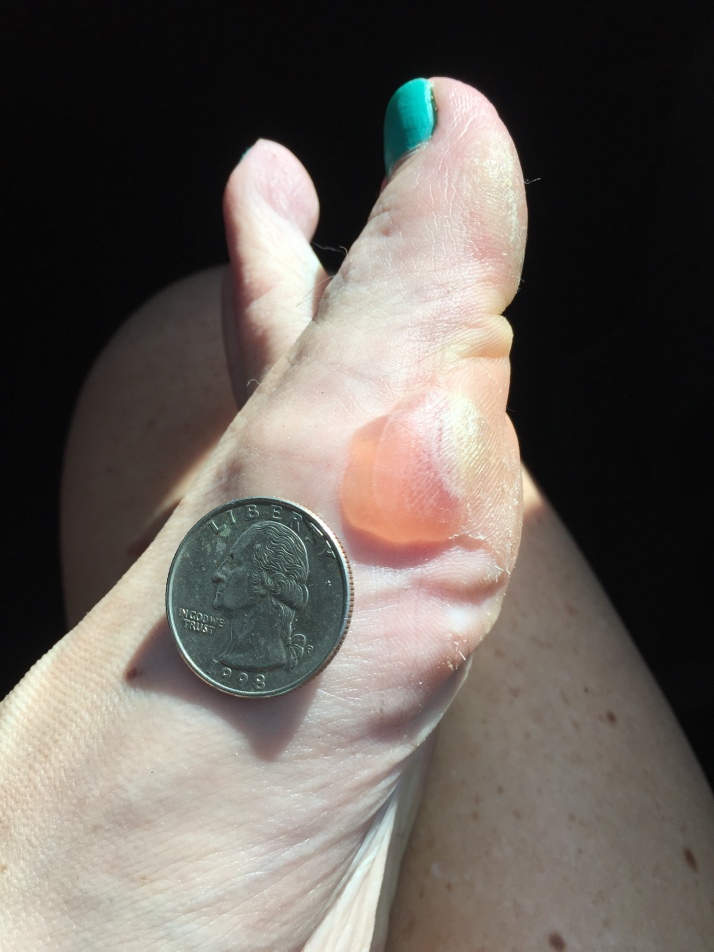 Blister earned after running the third leg of Ragnar Napa Valley in a pair of shoes I bought because the internet told me they’d make me fast.

The other was microscopic and didn’t even warrant a picture, so just imagine it happened.

So below are five nuggets of information I thought I’d pass along as to how best go about acquiring a pair of shoes that will make you feel like you could run a thousand miles (bad idea, shoes shouldn’t last that long).

I trust this store with my feet, which are nearly as valuable as my life.

As mentioned earlier, go get fit for a pair of shoes.  I owe a debt of gratitude to Jeff at my local Fleet Feet store as the first man to watch me run and help me find the shoe that was right for me.  He took my overly-large feet in his hands, made a decision based on his years of expertise, and sold me a shoe that has never failed me.  Ever.  I’m still faithful; just spent time with him today, actually.

I’m on my tenth pair of the same brand and model (although they’ve changed a bit over the years; see advice nugget #5 for info on that) and as mentioned above, I’ve never had ANY problem.

Listen to what the salesperson says, even if they’re recommending a shoe that’s a little more expensive than you expected.  Feel the fit of the shoe.  Run around the block in them (but pick up a good pair of running socks to do it; they usually have loaners and it’s not gross).

Talk to the shoe salesperson about what you feel when you return, and be honest.  Don’t feel obligated to like something because it’s recommended.  He or she will continue working until they find the one that’s right for you.

Now here’s where I differ from a ton of other runners/bloggers.  That first purchase, coming after a considerable amount of effort on the part of the shoe store expert, always happens at the store.  I may already know I can get them cheaper online, but I’m going to recognize the effort and buy those shoes there.

I’ll probably buy another pair in a few months and those can be an online purchase, now that I know what I need.

Step 3: Run in the shoes

Most reputable running stores will give you a 30 day time frame in which to come back and exchange a pair of shoes that don’t work for you.  Even trail shoes that are muddy and show use can be exchanged.  30 days is 30 days.

The key here is exchange: they won’t generally refund, but they will help you find another brand or model that works better.  Take them up on it if you have any doubts whatsoever about your shoes.

Much like a relationship between humans, small irritants in your shoe-human relationship will only magnify over time.  Don’t let it lead to a running divorce. 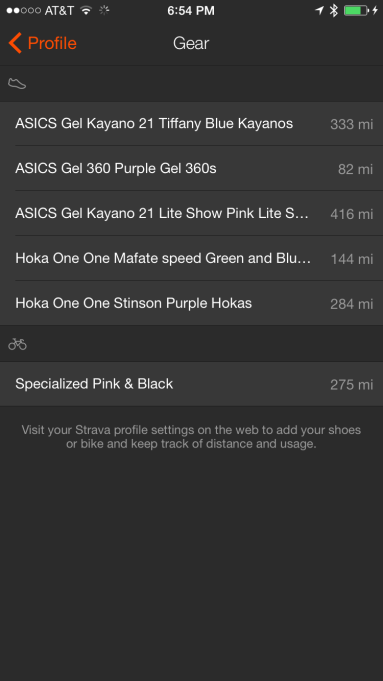 Oops, time for new shoes.  This also shows the ones I bought “on my own” and couldn’t wear for running.

Most running shoes should be good for anywhere between 300 and 500 miles of use.  I use a fitness tracker (Strava) to keep track of my gear and know when it’s time to retire a pair of shoes.  For me, I’m the unlucky sort who’s hard on her shoes and gets the low end of the range.  I find my shoes needing replacement after only 300 miles. Some get far more, some less, and you won’t know until you do.

Trust me, you’ll know when your shoes are done.  You can just tell.  Your feet hurt, your knees and hips ache…all signs that it may be time to get new shoes.  Now is the time you can buy online or do whatever your little heart desires for that same pair of shoes.

Remember, I said same pair.  Identical.  Ok, well maybe different in color, but not in brand or model.  Even if it’s the newest model brought out at the beginning of the year, the one that “upgrades” what you currently wear.

DO NOT MAKE THAT MISTAKE.  IT MAY COST YOU.

Which leads me to…

Step 5: Go back and get fit again

If your beloved Asics (or Brooks, or New Balance, or Nike or whatever) changes your shoe in any way, go back to step 1.  Go get fit again.

I learned this lesson recently when Asics changed “my” shoe, the Gel Kayano.  The Kayano 21 is my go-to shoe, the one I wear nearly every day.  When the Kayano 22 came out, it seemed logical to just buy the same size online, since I’d not had an issue before.

It was an issue.

The toe box of the 22 is ever so slightly different, but it makes a huge difference in fit.  I had to go up a half size just to prevent my toes from hitting the end of the shoe.  I had to return a pair I bought online and go to Fleet Feet to get fit, fearing I’d not be able to wear the Kayano 22 and wondering what I’d do. 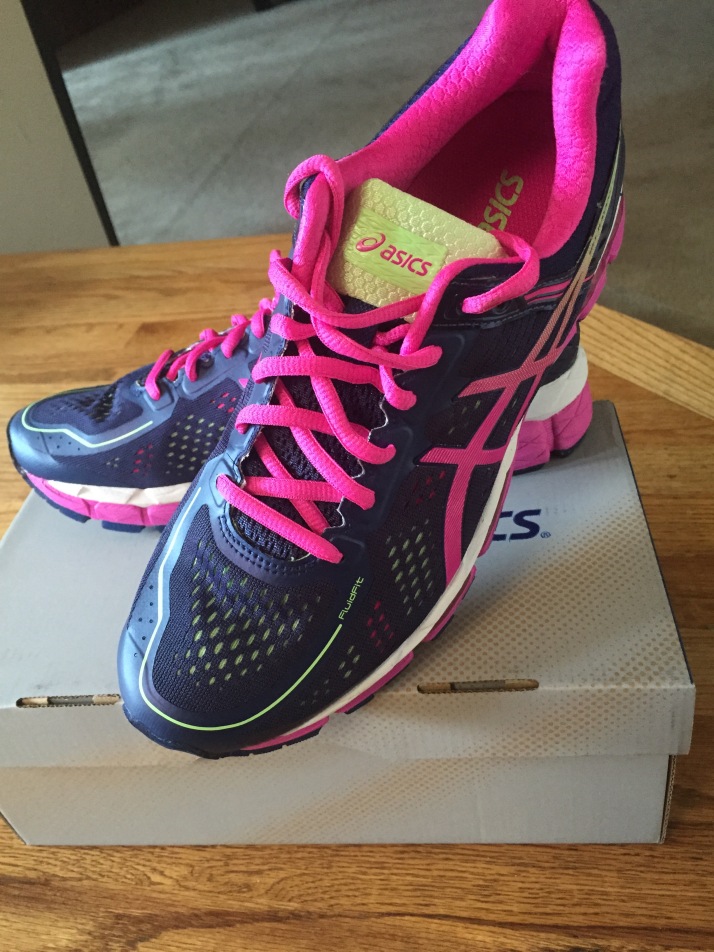 Size 10 looks huge, even in pictures!

Jeff was still there and he helped me understand that wearing a size 10 running shoe is not a judgment on my value as an Amazon woman.  It’s a judgment on Asics, and I’m ok with that.

So I was again reminded not to buy shoes online without first having them properly fitted.  I knew that already, but I tried to escape the need and just get my shoes cheap. No way.

Oh, and those aforementioned blisters…those came when I bought shoes I liked because of a review or blog about how much faster I’d be.  Still Asics, still top of the line…still wrong for me, no matter how fast I was supposed to become.

Step 5a is to fit your shoe to your purpose.  Don’t try to trail run in road shoes, at least not for any considerable distance.  Get the right shoes for the intended purpose.  If you’re gonna do this running thing you’re gonna have multiple pairs of running shoes in the closet anyway.  One more won’t hurt. Just go back to Step 1 and do it all over again. 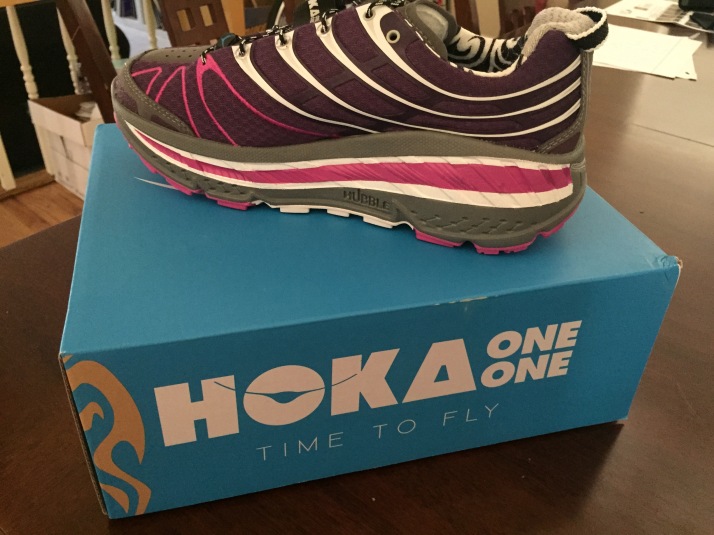 My trail shoes, otherwise known as my “Spice Girl” shoes.  Don’t judge, they work for me.

Step 5b is to donate your “retired” shoes to a local school, charity, or running group.  Most shoes between 300 and 500 miles have plenty of wear left in them for people who need shoes.  Just because we can’t run in them doesn’t mean someone else won’t appreciate them.  I worked at a high-needs high school and I can’t tell you how happy some of those kids were to get shoes through the program.  They were, sometimes, the only shoes they had all year.

So now you have all my wisdom on buying running shoes.  You probably heard it all before, but now you’ve heard it from me.

I’m hoping you don’t.  I don’t want to see your feet after that.

Neither does your pedicurist.